Implosion is a sound effects collection of buildings being destroyed by explosives.

Looking for a Multi-User License?

Implosion is a sound effects collection of buildings being destroyed with explosives. It features 10 unique building implosions recorded across the country. Each implosion is recorded with 4 to 14 channels of audio. To offer multiple perspectives, mics were placed as close as 50m (~150ft) and as far away as 600m (~2000ft) from the various explosive demolitions.

Each sound effect in Implosion is provided in two formats: Processed and Edited

This Implosion sound effects library is the culmination of a years worth of plane flights, road trips, hotel rooms, thorough planning, and changing those plans on the spot. Each implosion recording was an intense experience and the final product is no different. Learn more about each implosion and perspectives included below:

This behemoth stood as the tallest tower in Bethlehem for almost 50 years. Two series of wonderfully punchy dynamite explosions brought the massive building back down to earth in around 17 seconds, leaving plenty of time for rubble sounds from mass amounts of steel and reinforced concrete.

A metal leviathan, the Weirton steel mill could only be brought down with a truly massive explosion. An explosion so loud, with a shock wave so strong, it shattered an entire neighborhoods windows, and destroyed one of the microphones used to record it.  The mass of pure metal slowly crumpled to the ground releasing over 50 years worth of steel dust and debris.

This glass covered brick building was brought down with two series of timed explosions. Known as “Pasadena’s first skyscraper”, it met it’s demise after 17 years of vacancy. The implosion consists of wonderfully thuddy and sharp explosions followed by a nice mixture of brick and glass debris falling to the ground. Total demolition cost: $2.5 million.

Not one tower… but two! This was a world record implosion: the tallest cooling towers ever imploded. Constructed over a 2 year period at a cost of $600 million, the two structures took around 12 seconds to fall to the ground. That’s $50 million a second! The implosion consists of two simultaneous blasts that thunder out across the bay. The concurrent blasts, combined with the towers’ height, provides great constant concrete debris.

This enormous stadium was in the process of being demolished when crews realized the safest way to bring down the roof… was with explosives. Makes sense, right? The massive metal and glass covered roof and brought down with a simultaneous blast, with plenty of debris and glass shard sounds at the tail.

The folks at Vanderbilt University wanted to tear down the four “Carmichael” towers, but apparently had a real disdain for tower three in particular, as it was the sole tower slated for demolition via implosion. Using a continuous series of blasts, it fell in around 10 seconds.

When this hospital was finally ready for implosion, it was nothing but a reinforced concrete shell. A steady series of sharp explosions toppled it to the ground. The bare structure made for some wonderfully authentic large concrete rubble sounds.

Smack in the middle of downtown Midland, this concrete and glass structure stood vacant for decades waiting for it’s demise. Two series of dynamite explosions were used to topple the building. The urban environment provided this implosion some great reflections.

One of the smaller buildings in this library, but you couldn’t tell from the explosions! A set of massive methodical detonations followed by rapid blasts brought this concrete structure to the ground. Close mic placement captured wonderfully clean explosions and concrete rubble.

U-Hall, as the students called it, was put out of commission in 2006. The stadium stood vacant for 13 years, and fell in just 15 seconds. Two separate sequences of dynamite blasts turned structure to dust.

Like every other sound design library from Collected Transients, Implosion is recorded at 192kHz/24bit so all of the delectable ultrasonic content is properly captured. “But I’m not a dog!” you say, “I only hear to a mere 20,000 Hz.”

Fret not, Sound Designer, the ultrasonic content in these collections is captured to allow you to massively pitch-shift and process the sounds while retaining fidelity and revealing elements you couldn’t perceive before. Don’t take our word for it. Listen to demos and learn more here!

Implosion sound effects offer thorough metadata that works across all popular audio database software. Each file is embedded with exhaustive information about the recording. Aside from the usual ‘description’, many other fields are available that provide useful tidbits like recording notes, microphone information/placement, category, and sub-category. All sound effects also come embedded with an image showing exactly what was happening during the recording. 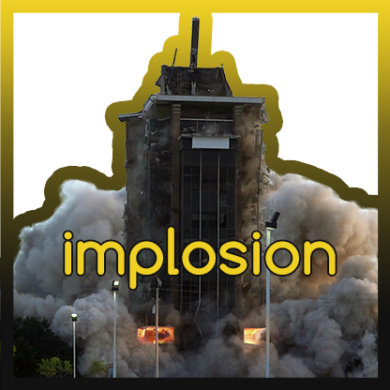